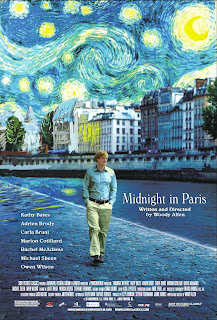 It is good to be back doing this after a hiatus. Happy New Year!

As I continue seeking to tune into present opportunities to see God and His glory all around us, that includes being able to see and hear His voice sometimes in popular culture. A surprise movie hit by Woody Allen this fall was his fun comedy called “Midnight in Paris.” Cindy and I watched it on a date night in December and it was interesting to me how it fit with the theme that I have sensed the Spirit of God impressing upon me. The message to me has been simply “live in the present.” When I succeed in living in the present I am able to experience so much of what God has for me. For me the problem is glorifying or over-idealizing the past. I can fantasize about the future unrealistically too but I would say I major on the past.

“Midnight in Paris” stars Owen Wilson as the protagonist. He is a writer for Hollywood who makes a good living but who dreams of being a “real writer” in the genre of his heroes Ernest Hemmingway and F. Scott Fitzgerald. He and his fiancé visit Paris where the Jazz Age of the 1920’s drew such famous artists as Hemmingway, Fitzgerald, Pablo Picasso, Salvador Dali and Cole Porter.

Gil longs to be in Paris during this time period and every midnight he magically is granted his wish as he is transported to 1920’s Paris with a cast of characters that makes you feel like your 20th Century American Literature class has come to life. Without giving the movie away too much, let’s just say that Gil came to somewhat of an awakening where he realized that his heroes were not much different than himself except they were longing for the 1890’s—a better past.

When we fantasize about a time in the past or if we view our past as better than the present we are being just as foolish as Gil. As wise old King Solomon lamented, “Do not say, ‘Why were the old days better than these?’ For it is not wise to ask such questions.” (Ecclesiastes 7:10)

By putting energy into this way of thinking we are only crippling ourselves from being fully alive in the amazing present we are in...to see the glory in the ordinary. This is what I ask myself as the new year is still young: “Am I present to my loved ones, friends and new people who come into my life? OR am I allowing my energies to be drained away like a leaky pipe by yearnings for what has never been or will never be in this present life?”

These ARE the good ole’ days!

Jamie
Redmond, WA
Jamie married Cindy in 1974, and they have been blessed with four children and two grandchildren. His most important calling is loving his wife for a lifetime and leading his children to know God and love Him. He directs the Bohnett Memorial Foundation, "a family foundation dedicated to championing community leaders and fostering family legacies." He is the author of "Like Father, Like Son," and is passionate about men growing in their faith in the context of small groups and one-on-one relationships. He loves to hang out with his wife and family, read, kayak, bike, hike with his "granddog" Griffey, grill beef products and watch the Seattle Seahawks in the wild and crazy section 105.